MANHATTAN, Kan. — Kansas State University scientists are part of a breakthrough study in which an international team of researchers has successfully deciphered all 10 billion letters in the genetic code of a wild ancestor of wheat.

Their work is published in the July 7 issue of Science Magazine. 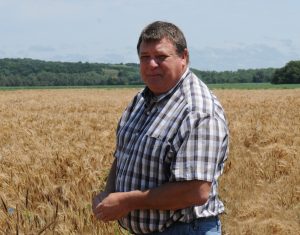 “The relative of wheat is called wild emmer, which is one of the founding crops of human society,” said Eduard Akhunov, professor of plant pathology and wheat genomics at Kansas State University. “Wild emmer was one of the first crops that was domesticated 10,000 years ago, which was a critical step in moving from hunting and gathering to an agricultural society.”

By knowing the genetic code of wild emmer, scientists can now compare its DNA to modern varieties to fully understand how wheat has evolved over thousands of years. With that information, they can better understand the genes that provide important traits such as drought and heat tolerance, or resistance to various diseases and pests.

“From a biological and historical viewpoint, we have created a time tunnel that we can use to examine wheat from before the origins of agriculture,” said Assaf Distefeld, a professor at Tel Aviv (Israel) University, who led the project.

“Our comparison to modern wheat has allowed us to identify the precise genes that allowed domestication of wheat. For example, while the seeds of wild wheat readily fall off the plant and scatter (a process called shattering), a change in two genes meant that in domesticated wheat, the seeds remained attached to the stalk, and it is this trait that enabled humans to harvest wheat.”

Akhunov, whose research team used a technology called “exome capture” to identify the regions of the wild emmer genome important for wheat domestication, said that wild emmer and other wild relatives of wheat have been a useful resource for improving wheat for a long time. Many of those wild relatives carry “beneficial genes that may make plants more resistant to different diseases or improve heat or drought tolerance.”

With the work done by the international team of researchers, Akhunov and his K-State colleagues can now more precisely identify gene segments that can help improve Kansas varieties.

“The small segments of the wild emmer chromosomes are being transferred to bread wheat, and these segments can carry some useful genes in there, and they can be used in (K-State) breeding programs,” Akhunov said.

“It is a valuable source for improving end-use quality of wheat, especially grain composition and the mineral content, and protein content,” he added. “There are a number of genes that are known to improve this trait, and they are coming from wild emmer.”

Fritz added that he and his team have done preliminary screening of accessions of wild emmer and have found resistance to wheat streak mosaic virus, while reports indicate it also contains genes for resistance to fusarium head blight and stripe rust. Wild emmer genes may also provide added value for wheat-based foods.

“The wild emmers can contain in excess of 30 percent protein, so there’s high protein,” Fritz said. “We also know from the research of others that you can find some wild emmer that has twice the antioxidant capacity of domesticated durum.

“We know that these wheats accumulate such things as iron and zinc at a higher level. So we can start to talk about nutritionally superior wheat varieties that can come out of this material. We think there’s real value there for consumers as well as helping to ensure production in an increasingly variable environment.”

However, even with newer technologies to speed up the process, breeding new wheat lines takes a lot of time. Fritz said it will take at least 15 years before traits from these wild wheats will be available in commercial varieties.

“It’s one of those things where, yeah, it’s a really long-term project, but if you don’t ever start it, you never get to the good stuff at the end,” he said. “You need to get the process started and work through it.”

Even so, Fritz added, “I’m really excited about this. We can do some really good things. I think there’s the opportunity to make much better wheat varieties, increase value in wheat for our producers, and to have a healthier product for consumers.”

The work completed at Kansas State University was funded by the U.S. Department of Agriculture’s National Institute of Food and Agriculture. The project led by Akhunov uses historic climate data from the regions where the wild wheat ancestors grow and information about their genomic diversity to identify valuable genetic variation for improving wheat production in local environmental conditions.