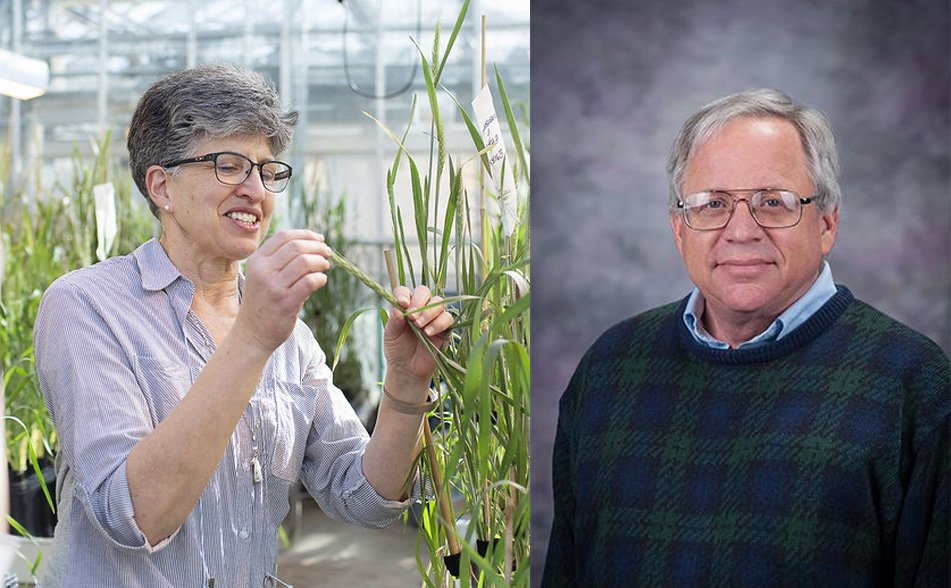 MANHATTAN, Kan. – Two U.S. Department of Agriculture scientists working on the Kansas State University campus are part of a national team that has earned praise for its pioneering work in building sturdy resistance to a highly-virulent strain of stem rust in wheat.

The Borlaug Global Rust Initiative awarded its 2020 Gene Stewardship award to a USDA Agricultural Research Service team that includes Robert Bowden and Mary Guttieri, who are adjunct faculty at K-State, and colleagues from four other states.

“When it comes to stem rust and breeding stem rust resistant wheat, this is the go-to team and the undisputed leader for the United States,” said Jose Costa, national program leader for grain crops at USDA-ARS, in a press release announcing the award.

“For years, the entire wheat community has relied on their leadership, scientific skills and contributions to cultivar development and screening for resistance to rust diseases. Their evaluation of materials in Africa and at the USDA facility in Minnesota is literally the only thing that stands between the American wheat producer and catastrophe should the disease – which is spread by airborne spores and jet streams – come to the United States.”

Bowden, supervisory plant pathologist with the ARS Hard Winter Wheat Genetics Research unit in Manhattan, said the group’s success hinges on stacking genes resistant to Ug99, a stem rust that has wreaked havoc in parts of Africa since the late 1990s, and other parts of the world since then.

“Gene stewardship is taking care of genes so they will be useful in the future, in addition to their usefulness now,” Bowden said. “We’ve had a lot of resistance genes over the years and we tend to put them out one at a time. But the pathogen (stem rust) can actually mutate and defeat the resistance gene.”

Wheat scientists at K-State have been successful in locating molecular markers in resistance genes that allow them to stack the genes one on top of the other and form a pyramid that is more durable to stem rust’s attempts to beat the resistance.

“When you stack them up, it becomes less and less probable that the pathogen is going to be able to mutate and defeat all of the genes in this deck. So if you want a gene to last a long time, you put it in a stack. Even if the pathogen defeats one, it doesn’t defeat the rest.”

Bowden and Guttieri have worked to stack six genes resistant to stem rust.

“This is an excellent example of collaboration across organizations and continents,” Guttieri said. “It’s so critical to stack these genes because we can lose the efficacy of years and years of hard work by deploying new genes independently.”

Currently, Ug99 and other stem rusts are not a problem in Kansas or the United States. American farmers are likely more concerned with leaf rust and stripe rust. Bowden said the same team is working to build pyramids of resistance to both of those rust diseases, as well. Guttieri added: “Kansas producers have experienced the boom and bust of single-gene resistance to leaf rust, and we are working to create gene combinations that will be reliable in commercial production.”

Since 2006, the USDA-ARS team has evaluated more than 20,000 germplasm accessions for genes associated with resistance to Ug99 and other stem rust races. So far, they have discovered 20 resistance genes effective against Ug99 and have published more than 140 journal articles.

Bowden says the teamwork shown across the K-State campus and among the participating scientific groups is symbolic of Norman Borlaug, an American agronomist whose work to breed high-yielding crop varieties helped land him the reputation as “The Father of the Green Revolution.”

“Norman Borlaug always had an international perspective that everybody is a human being and we can work together to improve the human condition on this planet, and to fight starvation and famine,” Bowden said.

“We’re proud to be part of the larger K-State team and the bigger USDA team and even the much bigger global team that is doing this work. Everybody is working together wonderfully, and it’s inspiring.”